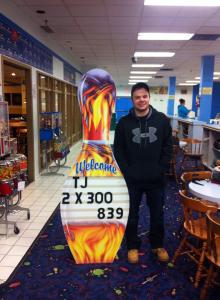 This is no April Fools joke!

On April 1, 2014, just like every other Tuesday night, T.J. Lariviere came to bowl at Bowlerama Royale in his GMDD mixed league.

As it turns out this wasn’t just any Tuesday night…

it was a record breaking night for T.J. and for London and District!

BIG CONGRATULATIONS TO T.J.!  We all share in your excitement!